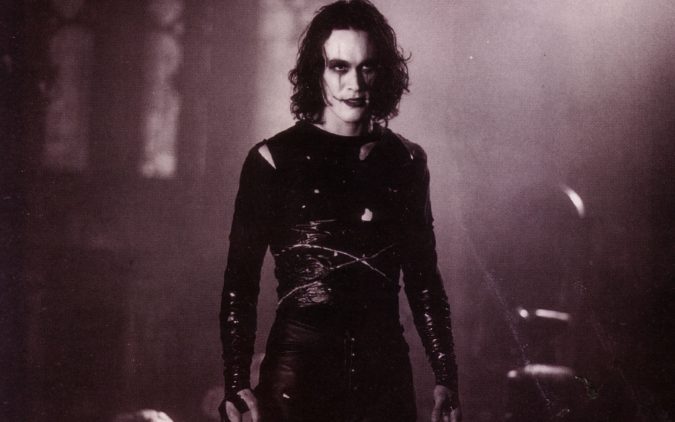 The Crow may be a cult classic, but it’s far from a masterpiece—it would benefit greatly from being given the remake treatment. In fact, I’d go so far as to say that The Crow is practically begging for a remake.

The Crow takes us on a rampage of supernatural revenge as in the popular graphic novel by James O’Barr. It follows Eric Draven (Brandon Lee) who comes back from the dead in order to take revenge on those who raped and murdered him and his fiancé Shelly (Sofia Shinas). It’s full of everything you want in a dark comic book adaptation, including demons, gothic romance, murder, death metal rock anthems, skull makeup and a narrative about grief.

If The Crow were remade today it would have to be very different than what we’ve already seen. With so many superhero movies now under our belt it’s impossible to ignore just how much they have in common with this story. While the first film did well at exploring the idea of vengeance as motive for revenge murders with supernatural elements thrown into the mix, it wasn’t quite mainstream enough to be fully appreciated by its audience.

Perhaps if Brandon Lee didn’t die on set during production things would have been different. Many people love The Crow because they watched it during their angsty teen years or because they’re fans of comic books and/or goth culture—it really isn’t hard.

All just a bit too good to be true you may say, and I’d agree!

It’s gone through production desks and got discarded and still no confirmed greenlight for the production. Sure, it’s a classic, but the original is tied up with some complicated legal issues. That doesn’t mean that a remake wouldn’t be profitable—there’s definitely a built-in, nostalgic audience that would be excited to see the film all over again.

And since it’s been a while since there was a remake of a classic like The Crow, wouldn’t it be perfect for the big screen?

Will it happen? I’d like to confirm a YAY or NAY on that. The proposed remake has already had some false starts in the past few years, and nothing has come out of those attempts yet.

But there are rumours and if the stars were ever to align and let this movie into production, I think it would be pretty great!

This is the best rumour source the film has had in a long time.

Well, it’s getting another shot at success: according to Bloody Disgusting, singer/songwriter FKA Twigs is on board with Bill Skarsgård (yes, the brother of Alexander Skarsgård) to star in a new version of the film—this time directed by Rupert Sanders (Snow White and the Huntsman).

This latest scoop on a modern reimagining of The Crow is rumoured for writing up by Zach Baylin, the Oscar nominated writer of King Richard.

There was previously another potential direction.

As you may recall, Corin Hardy was originally slated to direct The Crow, but he left the project due to creative differences. Since then, the production has been trying to find a filmmaker who would be willing to helm their newly-revamped adaptation of James O’Barr’s comics series, a possibility is Brian Helgeland most known for writing the screenplays for the films L.A. Confidential and Mystic River.

Even though Helgeland hasn’t directed a movie since 2009’s Green Zone, he has proven himself as an incredibly talented screenwriter over the course of his career—including having written one of my all-time favorite films: L.A. Confidential.

So even though it’s unclear how much input those aforementioned writers had on this version of the script (which also underwent revisions courtesy of Cliff Dorfman and Dakota Fanning), I’m inclined to trust that Helgeland could bring something special to The Crow if he chooses to embrace his inner goth kid and make this new adaptation more like O’Barr’s comics than Alex Proyas’ 1995 movie starring Brandon Lee (which was extensively rewritten).

Now that the production may go ahead with a filmmaker at its helm, hopefully we’ll get some plot details and maybe even get confirmation on who will play Eric Draven soon enough.

CGI should not be used to this degree on an original story.

You may be wondering what the big deal is about CGI. It’s a big talking point for fans of Brandon Lee’s film. For a remake: how much should be CGI and how much should never be? It’s everywhere, right? Right; but I think it’s overused in the original movie.

The Crow was originally a comic book like Superman but audiences are used to seeing the man of steel do impossible things that are only possible with CGI and special effects. The original Crow film also sports some great stunt work (not to mention Brandon Lee’s incredible athleticism) that would really have been hard to pull off without some help from visual FX.

In the remake, however, there’s no good reason why actors need to be flying around on wires and performing stunts that any normal human being couldn’t perform as well if not better than them. Also, there seems like too much use of motion capture technology here which doesn’t sit well with me because I feel like it makes things look more fake than they should and takes away from any ‘humanity’ these characters might have had before being turned into digital creations.

But who can kick ass like Brandon Lee and show impressive martial arts on film? Who would you like to see play the vengeful Crow?