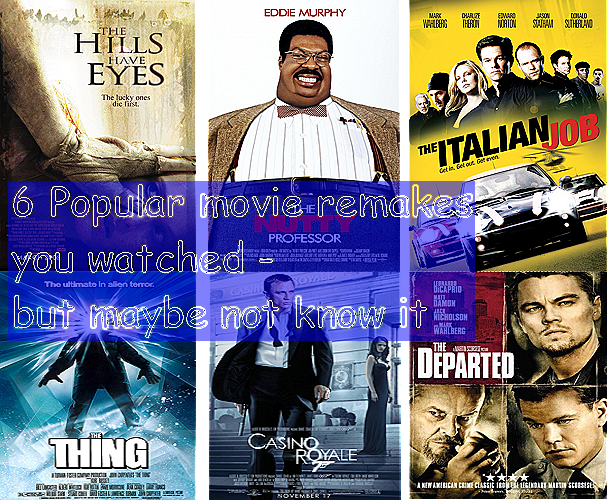 It will leave you in awe if you knew how many movies that you watched recently were actually shot before. And originally some time back in either the Hollywood studios or the colossal empire that is world cinema.

“Borrowing” well-acknowledged movies from around the world and remaking them with an English twist has long been a habit of Hollywood, with both good and bad results. Usually, these remakes deliver a revamped version of a foreign film.

The list of time-honored and respected movies that are actually remakes is endless.

What is even more difficult to accept is that occasionally the remake surpasses the classic that we are so wistful about. Here are a few examples of those:

Martin Scorsese’s crime drama from 2006, The Departed, is to this day one of his most popular movies. This is significant considering the long list of cultural milestone movies Martin Scorsese has directed. However, you should know that this tale of gangsters from Boston and the corruption in the inner ranks of its police department is actually a remake of a Hong Kong police thriller called Internal Affairs from 2002.

The title Casino Royale immediately stirs up memories of the 2006 James Bond film featuring Daniel Craig. However, this film is actually based on a James Bond film from 1967 called the same.

Unlike the remake which was a hair raising action film, the classic was more of a burlesque of the James Bond franchise. Peter Sellers, William Holden, Orson Welles, and even Woody Allen were part of the star-studded cast. Since the original was so distant from the other James Bond films, the original Casino Royale was, unfortunately, a misadventure, to put it mildly. Safe to say you would be doing yourself a favor by sticking to the remake.

The fact that John Carpenter’s 1982 The Thing is actually a reshaped version of the 1951 B-movie by the name of The Thing From Another World should not come as a surprise to the sci-fi enthusiasts out there.  However, the only two things in common between the two movies are the name and the premise of an alien hunting a group of scientists.

While the alien in the 1951 version just simply feeds on the blood of its victims, The 1982 remake centers around a shape-shifting alien that can take on the form of any living creature, and is more in line with John W. Campbell Jr.’s 1938 novella “Who Goes There?”.

The early 2000s saw the release of another car movie, the Italian job. This 2003 film attempted to take advantage of the glam and fruitful car movies of the time like The Fast and the Furious and Gone in 60 Seconds. However, this too is a remake of a 1969 British film of the same name.

The plot, an organized crime group trying to lay hands on a shipment of gold coming into Italy from Japan, is identical in both movies. The classic however carried more weight in it. Even though both films are worth your time, the original slightly surpasses the remake.

Eddie Murphy’s classic, the Nutty Professor, is a 1996 favorite among most. It’s about a weighty professor being that transforms into a handsome yet dense man, Buddy Love, by drinking a potion. Surprisingly, this movie too is a remake of a 1963 Jerry Lewis movie, titled the same.

The original follows a similar plot, however, while the original portrays a nerd with little social skills the remake portrays a heavy man with a golden heart as the professor.

Many are on the constant search for horror films that they might have blotted out. The fact that most reach out to the 2006 Hills have eyes instead of the actual classic from 1977 is intriguing. Although the 2006 remake is amazing on its own the 1977 original is a masterpiece by Wes Craven that fell between the cracks.

Even though the plot remains the same, the Wes Craven version brings a certain appeal to the table that remake does not. The remake though gruesome does not make blood its focal point. The original remains a favorite In the Wes Craven fan base and has a massive following, to say the least.

Which movies would you add to this list of remakes that you thought were originals?